Ms. Marvel is an Inhuman teenage superheroine in the Marvel Universe and member of the Avengers and the Champions.

Exposed to the Terrigen Mists, New Jersey teen Kamala Khan had her Inhuman powers unlocked. Now capable of stretching her body to a number of shapes and sizes, she takes on the previous title of her most beloved superheroine, Ms. Marvel, to protect New Jersey and the world.

Kamala Khan was born in New Jersey City to Yusuf and Muneeba Khan and was raised with her brother Aamir. Her parents and brother are immigrants who moved from Karachi, Pakistan to New Jersy before Kamala was born. While still in kindergarten, Kamala met Nakia Bahadir, who became one of Kamala's closest friends.  In the second grade, she met Bruno Carrelli, a young outsider her own age and the two became lifelong friends. Nakia and Bruno helped Kamala get through hard times, as she was often mocked by her peers for her differences, her nerdy interests and her strict parents.  Kamala also found comfort in her love of video games, social media, fan fiction, and superheroes, a topic she found deep facsination with. 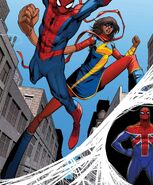 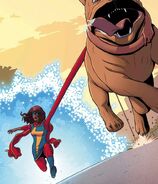 Add a photo to this gallery
Retrieved from "https://superheroes.fandom.com/wiki/Ms._Marvel?oldid=37063"
Community content is available under CC-BY-SA unless otherwise noted.