After his car was broken into, resulting in his son being injured, Benjamin Fodor decided to adopt a superhero identity to help others.

Information may be needed, if available for the early life of Benjamin John Francis Fodor.  What is known is that he was a Seattle, Washington resident who attributes his decision to become a superhero to several incidents in his personal life.  After his car was broken into, his son fell on some of the glass from the broken window, injuring himself.  Jones later learned that though there were witnesses to the break-in, no one intervened. At another date, he found a friend being assaulted outside of a pub and decided to call 911, then make a ruckus until the police showed up.

Fodor then decided to create a superhero costume and a pseudonym so that he could help people anonymously.

Base of operations: Seattle, Washington 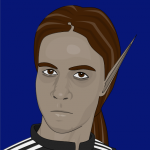