Shaktimaan is an Indian superhero television series that aired on DD National from 13 September 1997 to 27 March 2005. Produced by Mukesh Khanna and directed by Dinkar Jani. The series also aired on several other Indian TV channels in various languages: Pogo in English, Tarang in Odia, Chutti TV in Tamil, Kochu TV in Malayalam, and STAR Utsav and Dangal in Hindi.

Destined to battle an evil cult, Shaktimaan with gifted with powerful powers that seven gurus trained him to use.

Shaktimaan received powers from seven mahagurus who trained and blessed him with "yogic shakti which was natural power." He was the chosen warrior against evil by siddha gurus of a cult named Suryavanshi. They are followers of the star God Sun. As part of training, he trained with Kundalini Yoga to awake the 7 chakras of body and gain 'supernatural' powers from them. To gain complete control over his powers he performed the ritual of death. However, this did not cause death but made him more alive than when he was a normal man. He also performed Yajna in which he entered the fire himself and dissolved his body in fire. Then, the five elements of life, i.e. fire, air, water, earth and space revived his body giving him special powers from them. Thus after leaving his mortal body he was given a superhuman form to fight against the evil in the world as Shaktimaan.

After Shaktimaan was created he set out to destroy his archenemy Kilvish. But, as the Mahaguru (Tom Alter) explained, Kilvish can only be defeated after evil is destroyed. Shaktimaan's mission is to destroy the sin within people, not the sinned people. Shaktimaan's adventures show him pursuing justice and saving his friends while Kilvish and his minions plot to defeat him.

Shaktimaan has superhuman powers which lie inside his body in his seven chakras of Kundalini attained through meditation. Shaktimaan worships God through the symbol Om. Truthfulness is his motto. He can even separate his body into five different bodies of fire, air, water, earth and space,His powers included invisibility,intengibility, immortality, invincibility He is an expert, skilled and intelligent fighter and has fought with super-skilled enemies. He possesses physical powers like unlimited speed (up to the speed of light), Travel at speed of mind which is trillion times faster than speed of light, unlimited strength, durability as well as psychic powers like telepathy, teleportation, telekinesis etc.

Although he possesses godlike powers, his only weakness is a crystal (Papmani) possessed by Tamraj Kilvish which can be used to defeat and even kill him. This makes him powerless because it is filled with the evil of the world and is the source of the black powers. But he regains his strength after the crystal is taken away from him. He can be killed if the crystal is placed in front of him and he is treated violently to the verge of death.

Shaktimaan's powers are virtually limitless. He can do practically anything he imagines. The only limit to his powers is his own belief in himself and his knowledge of how to manifest his powers. His powers come from his chakras. (Note: Although we’ll call them chakras in the vedas, in the series dialogue they will also be called energy centers.)

The seven chakras in his body which give him powers are:

But if he will use his powers illogically, his powers will strictly taken back by his seven mahagurus, especially those powers which brakes the laws of nature, e.g. powers like time travel, revive a dead being and (change, create or destroy entire universe), powers like these can be used only in very extreme conditions when entire universe will in danger. Thus, Shaktimaan uses his powers in limit according to the situation.Shaktimaan can also manipulate reality and time at godly level.

The five elements of nature which give him power are:

You are not estimated to have a compound of 1% of his spiritual powers, friends!

So first of all we talk about Shaktimaan. The basis of Shaktimaan is yoga and spirituality, which is certified.

Shaktimaan on this basis is possible in the real form.

The creation of Shaktimaan has happened to restore the truth and righteousness, but it can not be said about superman.

As we know that the source of the power of Shaktimaan is Kundalini,

There are seven chakras in the Kundalini

Ability to live in water, control of the temperature of a water body by the desire. Fearlessness, articulate, calmness, cleverness, fickleness and introspective, self-contained and self-sufficient. Penetrating, critical and scrutinising, seeking knowledge and understanding abilities. Super high speed of swimming, knowledge of languages of aquatic animals.

Complete knowledge of yoga, can live without water, food or air, flight, can control heat waves to generate fire, invisibility, velocity almost equal to light. Fills up with spontaneity, inspiration, good leadership capacity, intuition, and develops big passion. Knowledge of all languages present on earth, even of animals, birds, plants and trees. Hypnotism, meditation, medicine as well as knowledge of Ayurveda.

Omniscient, ability to flight/float in air. Qualities like quick Thinking, well discipline, curiosity to initiate and stability of behaviour in every situation. Telepathy, foreign entry (entering the living or dead body of another). Can see everywhere on earth from any distance. Divine vision to see the invisible, rejuvenation, attracting all the pace of mind, the meditation and manifestation, hypnotism, Immortality.

Knowledge of ancient and modern science, the ability to curse, knowledge of entire texts literature composition, develops good qualities of sing, music and dance art, to hold many bodies like yours or different. Shape shifting, Knowledge of the subtle mysteries of the universe, Revealing any substance from zero, turning one thing into another, hypnosis and hypnotism.

Devour someone, awakening of alternate. To give someone infinite powers, ability remove all types of rays, such as power rays, xray vision. Becomes like God, infinite powers, attains brahmana (universe) complete knowledge of the action of cosmic intersection, can go on different orbits, planets, stars etc. Basically, anywhere in the universe in just a one second.abillity to create and destroy whole universe in a single attack.

Hamara Hero Shaktimaan was the first film of the series which was aired on Pogo TV on 30 June 2013. 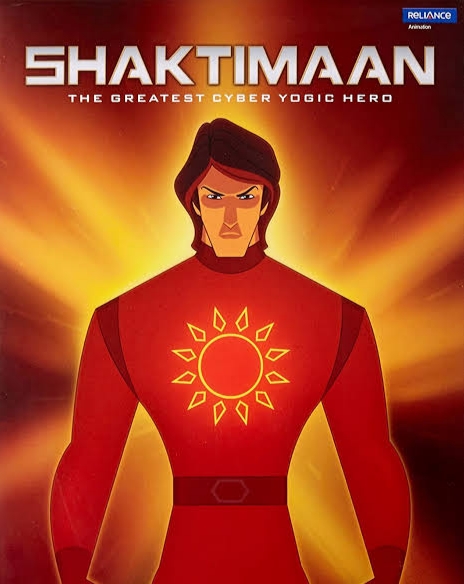 Shaktimaan: The Animated Series is a 2011 English-language, Indian 2D animated television show based on the live-action series of the same name. Produced by Reliance Animation in association with Accel Animation Studios, the series centers around Vehaan Arya, a young college student who uses his yogic superpowers to become Shaktimaan and defeat the evil forces of Kilvish, who wants to destroy the world.

But it is not exactly same to the live action series of Shaktimaan. This 2D animated series have many major differences like Shaktimaan's suit changes, a lot difference in the power levels, changes in almost whole storyline and change in names e.g.- Pandit Gangadhar Vidyadhar Mayadhar Omkarnath Shastri changed into Vehaan Arya and many more.

Community content is available under CC-BY-SA unless otherwise noted.
Advertisement